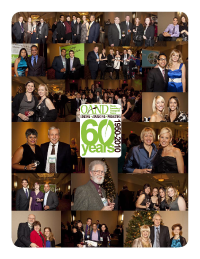 OAND Turns 60!
It was October 12, 1950 when a group of naturopathic doctors (NDs) incorporated to form the OAND, with the goal of unifying the profession and providing quality health care to Ontarians. In fact, Ontario was the first province in the country to regulate Drugless Therapists (DT). Since then, NDs have dedicated themselves to improving the health and lives of patients across the province. Sixty years later the naturopathic profession in Ontario has recently been awarded prescribing rights and is awaiting the opening of the new College of Naturopaths. We have a lot to celebrate with the hundreds of naturopathic doctors improving the health of Ontarians!

The OAND celebrated its 60th Anniversary at our annual Convention, November 13th, 2010 with a Gala celebration. Professional and Corporate Members were honoured and thanked for contributing to the profession.

The OAND’s 60th Anniversary Gala was sponsored by